I ran part of this race 6 years ago (whilst doing the relay) and had a DNS (did not start) – due to injury – 3 years ago. This was finally the year to scratch the Man V Horse itch.

writing this wearing the event t-shirt) in typically Welsh summer weather. We get ourselves registered and join a queue which appears to have some portaloos at the end. Once the pre-race rituals are done, we make our way to the to the Neuadd Arms Hotel where 40 years ago – during a drunken discussion over who would win a race between an man and a horse – a race was born. We hang around trying to keep warm and chat to fellow runners before the time comes to fight our way to the back of the starting melee.

After a few speeches we are off. The first km or so is along the road, the banter flows as

runners joke and laugh with each other. Before long the road begins to rise – gently at first – and there is a direct correlation between the amount of chatter and the gradient we are tackling. Before the top of the first hill the road gives way to a rocky track.

Once at the top the track thins out to some single track – boggy single track. This section of the course it wet and squelchy. Its great fun pilling through the puddles and gliding across the muddy track – in my minds eye we are gliding.

We begin to descend, but before long we hit a bottle neck as the trail drops down a rocky bank to ‘The Bog’. We successfully negotiate the bog –

much to my relief given previous bog experiences. We trudge back up the bank on the other side before beginning to descend again along sweeping single track. Before long we come out onto the Forestry Commission fire trails. Its along here that we are passed by the first of the horses. There is a definite buzz amongst the runners as the horses approach, with a number of people (myself included) fumble for their phones to try to get a selfie with a horse in the background. We stay on the rocky fire trail and continue to climb, before peeling off back into the woods and beginning to descend again.

As we reach the bottom, we take a hard left into open moorland. At this point the route goes skywards again. By this point we have firmly bought into a walking up the hills strategy – we aren’t yet at the point of walking every hill, but certainly the longer steeper ones.

The next 5km are a bit of a blur as the suffering begins to set in. Tom and I are still chatting away – maybe a little less than the first 5 km – but I take far less notice of the surroundings. I am abruptly pulled out of this daze about halfway up the biggest climb of the day. As we trudge up my peripheral vision is suddenly filled by a dark mass as a horse comes galloping passed a couple of feet away – scaring the shit out of me in the process. Tom has openly and freely admitted that he would have loved to have seen me run over by the horse. As the adrenaline surges, I become more aware of my surroundings and begin to enjoy the views – rather than staring at my feet. The steepest part of the climb ends as we cross a stream, and we top out onto high moorland.

As we run along the top Tom’s bladder burst at the seam making it appear he was dissolving out of his rear end – and to be honest with some of the noises he had been making I wouldn’t have been surprised if his lungs were falling out that way. We stop to try to rectify the problem before he loses all his water down his back. With no other option he elects to carry the bladder upside down for a few kilometres. The few minutes it took to sort Tom’s leaky bladder (and there is a sentence I never want to write again) gave us a chance to regroup, and the rest of the way across the moorland to the vet check – which thankfully neither of us need to pass – flow by comfortably. Once passed the vet checkpoint we return to the fire roads and spend the next 3km descending as the horses begin to repass us as they pass the vet check. Before long the surface changes from fire roads to moorland dual trail and forest single trail.

I begin to hanker for the second relay changeover point, and when we finally get there it is a real shot in the arm knowing we are on the last relay leg. The next bit of the route is along the road and although being on the last leg is a boost the hard top really hurts. After a short (but by now very sharp feeling) rocky hill the route levels out. Along here we pass a guy in a crumpled heap appearing in all sorts of trouble. We stop – as others run by – and discover he is cramping up. Tom whips out his trusty can of Deep Heat (I am beginning to wonder if he goes anywhere without it) while a fellow runner gives him a block of cheese. Once the Deep Heat and cheese has been administered, we help him up and encourage him to walk to try to free himself up. Once we are confident it is only cramp, we get going again. Within 5 km Crampman (not all heroes wear capes) had repassed us, Tom and I congratulate him on getting going again and running so well, while deciding we had to keep him in view, and more importantly make sure we finish before him.

Before long the horse (and rider) that scared the life out of me passed us again(this time with a nice clear warning and a thank you). However the dye and been cast and I really wanted to beat her – or at least cross the line first – so I keep her in view as we climb. As we begin to go down the rocky descent on the other side, I begin to reel her in. By the bottom I have passed her – thinking the end was nearing. We cross a river about 5m apart and I give it all I can.

Then comes the sucker punch. That wasn’t the last hill, I’m now at the bottom of the last hill and it’s a steep, rutty monster of a ramp – and what makes is worse I have to move off the path to let the horse pass. Tom and I regroup on the hill after he had very sensibly let me go off on my fool’s errand alone. We clamber to the top to find a lovely section of single track waiting for us. Its wonderful running, but there is no way you would get me on a horse along here. We pass through a farm, then through a corridor of trees and hedgerows before a succession of lefts and rights as we negotiate hedgerows and the edges of fields.

Somewhere along here I notice Tom is about 10 to 15 metres back. I hadn’t intentionally dropped him, but now he was distanced I certainly wasn’t going to wait for him – and I make an effort to see what I can get on him.

By now the hedgerows have ended and the path has become a potholed, rutty path through was high grass. It gets to the point where stride length is dictated by where the next bit of raised path is rather than where you would like to land your feet. Thankfully

this doesn’t last long, and the finish is within touching distance. I enter another tree corridor and after about 150m it’s a tight left and into the finishing field and on the finish line. I give the last section all I have – while also giving a few sweaty hi-fives to the kids at the barrier approaching the finish line. As I cross the line, I instinctively look back to see where tom is – and I catch a glimpse of him running into the tree corridor. I do the gentlemanly thing and get my phone out ready to get a picture of him crossing the line – that’s what friends are for.

Six years after running the relay – and three after the DNS – it was truly wonderful to finally run the whole route and I genuinely can’t wait to do it again. 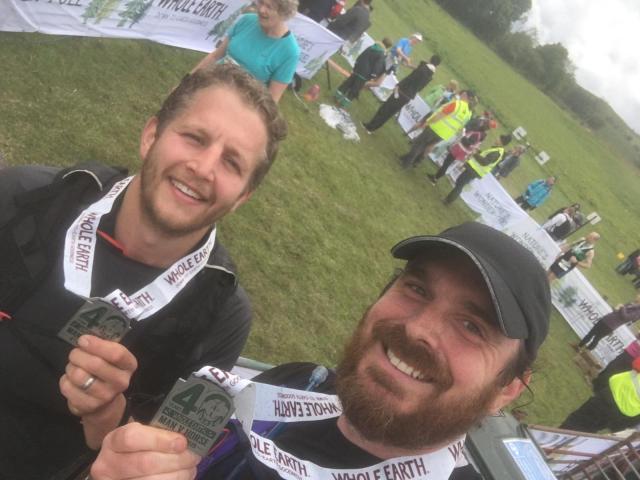